⚠ Linux and Windows users: CCS versions 5.3 and greater for Linux and Windows do not support the installation of necessary plugins (BIOS MCSDK 2.x) for the use of Keystone I multi-core processors. We thus highly recommend to use a CSS version 5.2.1 and the offline installer. More information on MCSDK versions can be found here.

The starting point of this tutorial is the Preesm project obtained as a result of the Parallelize an Application on a Multicore CPU tutorial.

Note: The supplied project has been designed and tested only with the TMDSEVM6678L EVM. However, we see no obvious reason why this project should not work with other Multicore DSPs from TI, provided that appropriate settings are made in the CCS project.

To begin this tutorial, open your own copy of the Sobel project in Preesm or simply unzip and import in Preesm the downloaded project. This project contains an implementation of the Sobel filter application obtained as a result of the Parallelize an Application on a Multicore CPU tutorial). The project modifications needed to generate code for multicore DSP from Preesm are presented in this section.

Definition of the Target Architecture

In the “Package Explorer” of Preesm, create a new directory /CodeC6678/ and create a subdirectory named “generated”. Follow the following steps to configure a new scenario:

You are now all set to generate code for the multicore DSP. To do so, simply launch the Codegen.workflow on the newly created scenario.

In this section, we will guide you through the creation and configuration of the CCS project needed to compile and run the generated code. As CCS is an Eclipse-based tool, the behavior of CCS projects is equivalent to the one of Preesm projects.

The code generated by Preesm for multicore DSP relies on the definition of a custom target platform in CCS. This platform is used to specify the memory regions in which the code and data will be stored when running an application on the EVM. To create a custom platform: 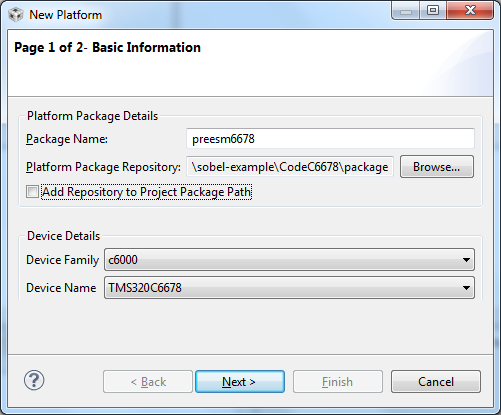 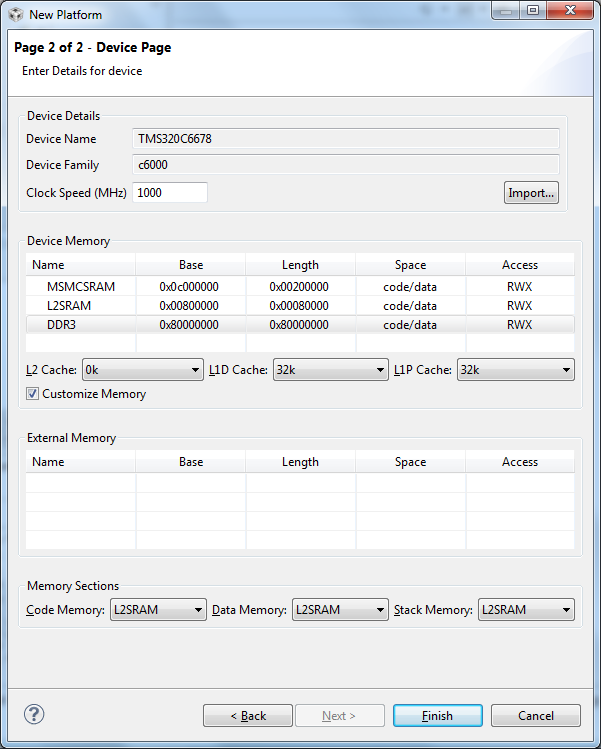 The following steps will guide you through the creation and the configuration of the CCS project:

If the “Build Automatically” option of CCS is activated, the compilation of your project will launch automatically but will encounter errors. The following steps will help you solve this issue)

To compile the project, you now need to add to your project the source code that implements the communication and the synchronization primitives used in the generated code as well as the actor code. A zip file containing all necessary files is available [here]. This file should be merged with the “/Code6678/” directory.
Here is a short description of some of the files contained in the archive:

After the archive is unzipped, refresh the CCS Workspace and compile the project. At this point, the compilation should be successful.

Execution of the Sobel filter on an EVMC6678

After building the CCS project successfully, this section will show you how to load your application on the 8 cores of the DSP and how to check that the application works properly.

Before loading the application on the EVM, we are going to configure the project to automate the tedious and repetitive task of loading the GEL files on each core of the EVM. To do so:

Before connecting your EVM to your computer and plugging its power supply in, make sure that your EVM is in “No Boot” mode. To do so, simply set the switches of the EVM6678 as follows: (cf. here for more information)

Connect your board, first to the PC USB, then to the power supply.

To load the application on the EVM:

Load the video in memory

In the map file generated next to the program (back in the “CCS Edit” perspective, in the “/sobel-6678/Debug/” directory), check where in memory is allocated the section “.myInputVideoMem”. It is certainly at the beginning of DDR, thus 0x80000000. In this section, we want to load the video. This section is defined as “NOINIT” in the SYS/BIOS cfg file so it will not be erased if you reload the code.

A program to convert the YUV video into a .dat hexadecimal file compatible with CCS is provided as static binaries for [win64] and [linux64])) The program is named yuv2dat. To use this program, launch the executable in a command window; this will tell you the required parameters to convert a *.yuv file. Set the number of frame to convert to 10 (“-f=10”). If you want a different value, you will need to change the pre-processing variable NB_FRAMES in the yuvRead.h file of your CCS project. Once you converted your input video, you can load the dat file in the DSP memory. To do so,

Back to the Image tab, click on the Refresh button. You should now see an image from the video you loaded on the board. 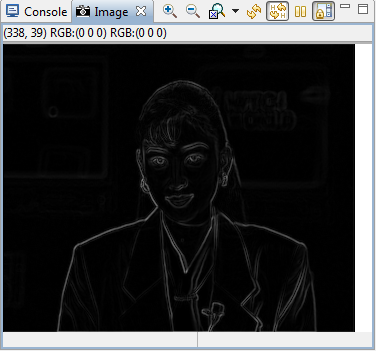 It sometimes happens that only white noise appears in the image view. This issue usually arises when something went wrong during the loading process. The best way to solve this issue seems to be to reload the binary on the EVM and re-launch the execution.

Similarly to what is presented in the Automated Measurement of Actor Execution Time tutorial for CPU, it is possible to print instrumented code for DSPs. To do so:

You now have all the information you need to update the “Timing” tab of the Preesm scenario. Keep in mind that this method is experimental and the precision of the measured execution time might not be optimal. Moreover, the overhead induced by inserting instrumentation calls into the generated code has not been evaluated. Finally, using profiling tools from CCS might be a good idea. (Feel free to contact us if you want to help us improve this tutorial by using such techniques).

Despite the use of the 8 cores of the c6678, the performances obtained are still quite poor (~34fps in debug and ~50fps in release). The main reason for these bad performances is the memory allocation scheme used in the generated project. Indeed, the allocation scheme used in this project consists of mapping all the buffers used to transmit data from an actor to the next in the DDR3 memory. Because the DD3 memory is an external memory, memory accesses to data stored in this memory considerably slow down the execution of the program. To solve this issue, we are going to activate the DSP cache.

Each one of the 8 cores of the EVM possesses a private L1 cache of 32kB. To activate this cache, simply follow these steps:

Then, simply load the program on the 8 cores of the EVM and launch it. Activating the cache should result in a performance increase by a factor 10. (~333fps in debug and ~500fps in release). Check the correct behavior of the application (cf. section 4.3 of the previous tutorial).

NOTE: This optimization may seem artificial at first glance. Indeed, the files we provide include manual disabling of the cache (line 19 in cache.h #define CACHEABLE 0 enables lines 98 to 104 of main.c)). However, because of the memory alignment issues with this kind of DSP, that is a feature that we usually want disabled by default. The example application in this tutorial is using buffers that are always aligned (see section 6.3 below). There is, however, no warranty that the writebacks will not overlap in the general case. But because the performance gains are significant, we want the cache enabled for all applications. This motivates having proper memory allocation. We discuss this topic further in next sections and tutorials.

The Debug environment of CCS allows you to visualize which address ranges are cached. To do so:

Cache Coherency on the Multicore DSP

Contrary to multicore x86 architectures, the multicore c6x hardware does not guarantee any cache coherence between the 8 cores of the chip. For this reason, when Preesm generates code for the DSP, it automatically includes calls to the cache coherency primitives: writeback, invalidate, and writebackInvalidate.

In order to experiment what would happen without these primitives, simply add the following lines to all 8 “coreX.c” files, right after the header inclusions. The effects are best observed when memory reuse is activated (cf. Memory Allocation tutorial: FirstFit allocator))

Rebuild and launch the project. Using the image analyzer, observe the result of the algorithm. The observed result may vary depending on the memory allocation strategy you are using (cf. Memory Footprint Reduction tutorial).

Note: There is no noticeable artifact really visible with the sobel demo application.

In addition to the cache coherency, the programmer of a multicore DSP must also take great care of the alignment of data in memory. Indeed, if two buffers are not aligned properly in memory, they might be allocated in contiguous address ranges that will be cached simultaneously.

For example, with a cache line size of 64 bytes for the L1 cache, if two 32 bytes buffers A and B are respectively allocated at the addresses 0x000 and 0x020; these two buffers will be cached together. We consider a scenario where two cores c1 and c2 have this line in their private cache and where c1 modifies the value of A and c2 the value of B. If each of the two cores perform a “writeback” operation of the cache line, then the second core will overwrite the new value written by the other core in the shared DDR.

In the Sobel application, each core reads a slice of the original picture, that is, with the akiyo file, (352⋅(288/8+2)) = 13376 pixels. Since this value is a multiple of 64 and the pixels are coded with uchar, buffers are naturally aligned with the cache lines. Consequently, no memory alignment was required in the previous sections.

To ensure that the buffers of an application are always aligned in memory, follow the following steps:

To simulate the effect of cache misalignment on the Sobel application, force the alignment on addresses that are multiples of “3”. If you are unlucky enough, several buffers will be allocated in ranges of memory cached in a single line of cache, and corrupted lines will appear in the result produced by the algorithm. The following figure gives an example of corrupted output: 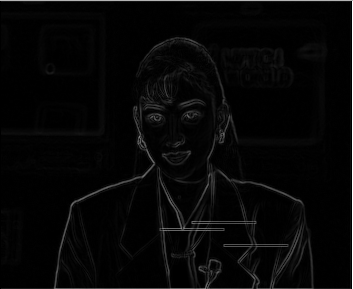 Finally, all techniques presented in the CPU tutorials, such as the memory footprint reduction or the pipelining techniques can successfully be used to seamlessly improve the performance of an application on a multicore DSP.