The starting point of this tutorial is the Preesm project obtained as a result of the Memory Footprint Reduction tutorial. 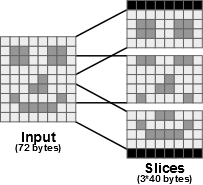 To allow memory reuse between input and output buffers of actors, new information must be provided to Preesm about the internal behavior of actors and how they access the data contained in their input and output buffer. This new information is provided by two new inputs defined by application developers: Memory Scripts and Dataflow Ports Annotations.

A memory script is a small program associated to an actor of a dataflow graph. Contrary to the source code describing the functional behavior of an actor, the only purpose of a memory script is to match ranges of bytes of input and output buffers that can be allocated in a common memory space.

Through the example of the Sobel application and its Split actor, the following sections explain how to create, write and execute a new memory script.

Associate a New Memory Script to an Actor

To create a new memory script and associate it to the Split actor, follow these steps:

The language used to for the implementation of the memory script is the BeanShell scripting language [1]. The syntax of the BeanShell language is based on the Java programming language, and supports most of its features (including object programming). In addition to the Java syntax, BeanShell also supports advanced scripting features such as untyped variables. For more information about BeanShell, go to [1].

Finally, two methods can be used to match ranges of bytes of two buffers b1 and b2:

The following code presents the memory script associated to the Split actor. Copy-paste this code into the “/Code/Scripts/split.bsh” file. The corresponding file can also be downloaded [here].

To associate this script with the Split actor, follow these steps:

When executed, this code creates a match for each output slice produced by the Split actor. The following figure illustrates the matches created by this script for parameters height=9, width=8, and nbSlice=3.

Each output range corresponding to a slice is matched in the corresponding range of the input buffer, thus creating overlaps between the matched input ranges. It is interesting to note that the first and the last ranges of the output buffer are partially matched outside the boundaries of the input byte range [0, 72[. The bytes within the [0, nbTokens*tokenSize[ range of a buffer are called “real” bytes, and bytes outside this range are called “virtual” bytes.

When writing a new memory script, the following rules must be respected:

If one of these conditions is not met, an error message will be displayed in the console during the script execution.

Configure the Workflow and Execute the Scripts

A new workflow task must be added to the workflow in order to execute the memory scripts of an application. To do so:

As a result of the workflow execution, the following lines should appear in the “Console”:

Open the log generated in “/Code/generated/log_memoryScripts.txt”. For a better readability, we strongly advise you to open this log with a Markdown viewer such as [this one]. The first four lines of this log summarize the result produced by the “Script” workflow task. 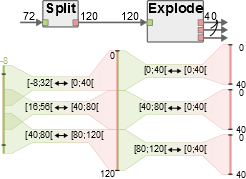 The next two lines of the log give the number of independent buffers, and the total size of these buffers before and after the matches were applied. The following section of the log detail the optimization process for each independent tree. For each tree, the log contains:

As presented in the rules above, it is strictly forbidden to overlap the matched ranges of bytes on the output side of an actor as it would systematically corrupt the behavior of an application. The next figure presents an illustration of this issue. 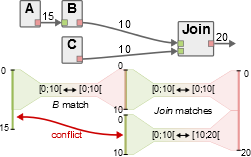 A chain of matches cannot be applied if it results in merging several ranges of bytes in overlapping ranges of an output buffer. In the figure, if all matches were applied, the output buffers of actors A and C would be merged in range [0; 15[ and [10; 20[ respectively of the output buffer of the Join actor. Hence, if all matches were applied actor A and C would access overlapping memory spaces on their output port. In such a case, if actor A was scheduled after actor C, then actor A would partially overwrite the data tokens already produced by actor C, thus corrupting the application behavior. Contrary to matches with overlapping ranges in input buffers, no port annotation can be used to relax this constraint.

Associate an Annotation to a Port

The following steps explain how to assign the “read_only” annotation to the input port of the Sobel actor.

The next section presents the positive impact of this memory optimization process on the performance of the application as well as code modifications to apply before compiling and running the generated code.

For example, the code generated for the implode_Merge_input actor should look like this:

When the matches created by the memory scripts are applied, the generated code becomes:

When the matches of the Split actor are applied, the buffer corresponding to the output port of this actor is divided into several parts that are merged separately into the input buffer. In such a case, the memory space corresponding to the output port of the Split actor consists of a non-contiguous memory space that can no longer be accessed with a regular pointer. If the “Verbose” property of the “Scripts” workflow task is set to “True”, the following log entry will appear in the console during the workflow execution:

A buffer can be divided and matched into non-contiguous ranges of bytes if an only if all actors accessing this buffer expect this division. An actor expects a buffer to be divided if it is associated to a memory script that matches several ranges of bytes of a buffer into non-contiguous remote ranges. In the sobel application, the buffer corresponding to the FIFO between the Split and explode actor fulfill this requirement. Additional requirements for a buffer to be divisible are presented in [2].

To ensure the correct behavior of the application, the C code of the Split actor should be changed as follows (null check on the output and specific behavior in case of split):

Like the explode and implode actors, most of the memcpy calls of the Split actor can be removed when the memory script optimization is used.